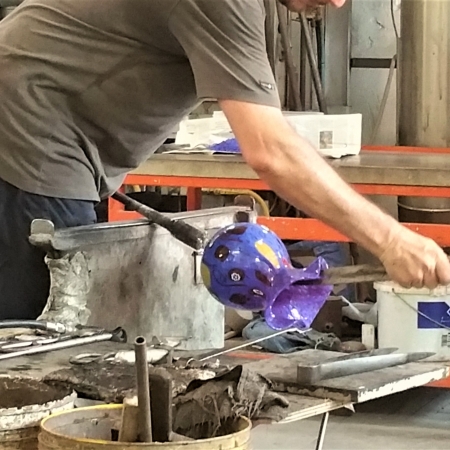 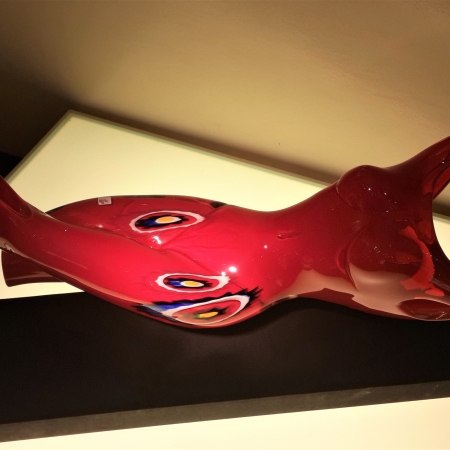 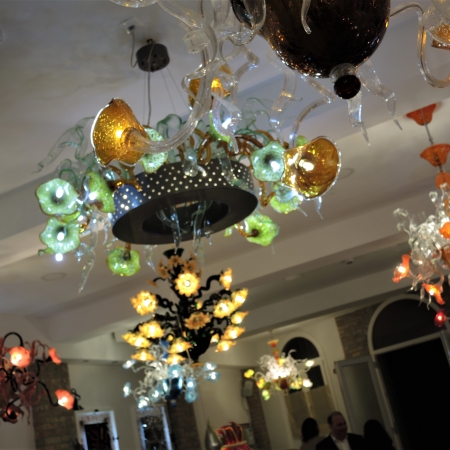 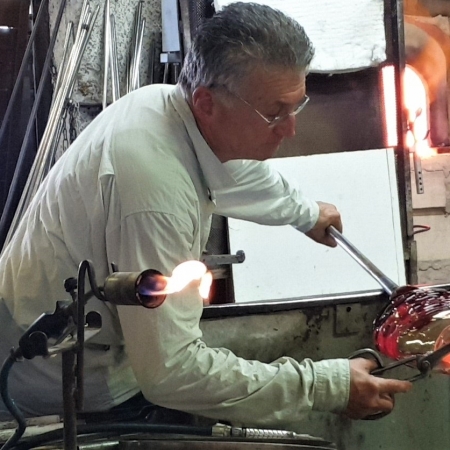 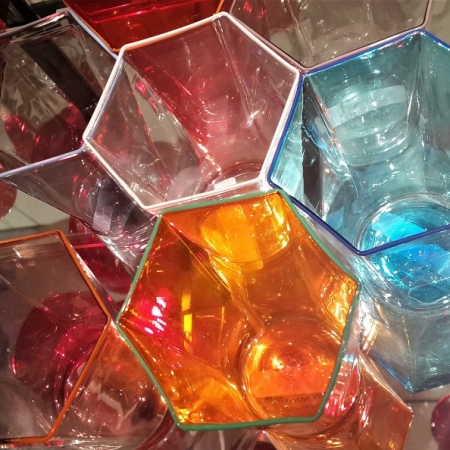 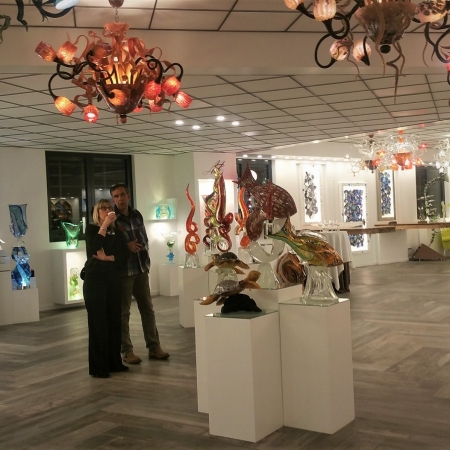 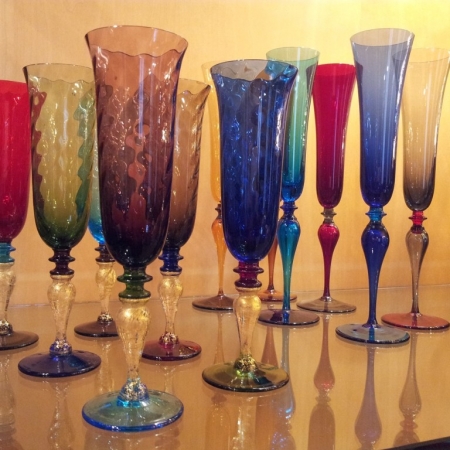 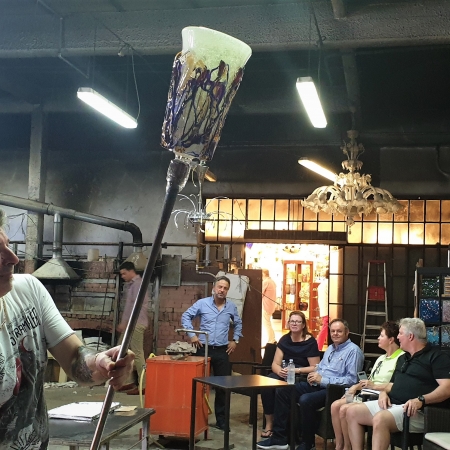 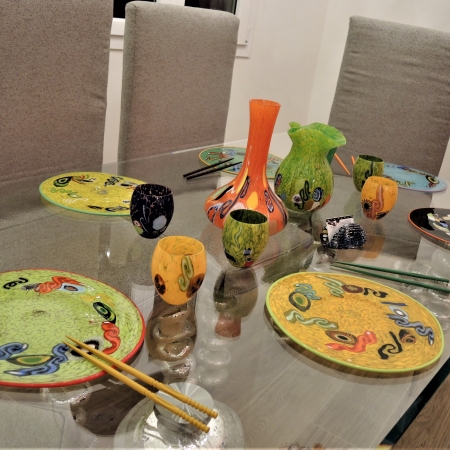 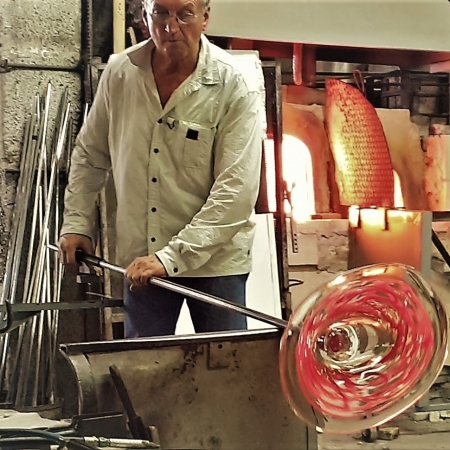 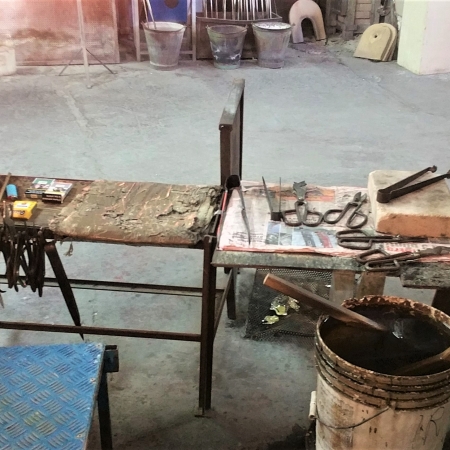 We start the tour with a visit to a very traditional Murano furnace, renowned for their classic Rezzonico chandeliers, Baroque-style goblets, crystal gold cups, colored chalices with twisted stems, and more.

Father and son work together, while the rest of the family assists, performing in perfect silence and synchrony, as everyone knows their roles and gestures very well. It almost looks like a dance!

The second glass atelier we shall visit creates modern and unique pieces, like large vases, chandeliers, and sculptures, all based on the glass master’s personal style and as the direct expression of a long technical and creative evolution.

You will be amazed by the simplicity of the tools used, and by the artist’s intense concentration in the heat and smoke of the burning furnace!

You will also have time to explore the showrooms and ask all the questions you wish about the objects exhibited.
An exciting firsthand experience which you will unlikely find anywhere else!

Continue reading
Maps were disabled by the visitor on this site.

A tour focusing on the island of Murano, where glass-making families have been in business for over 700 years. They tenaciously continue today to carry on the art of glass blowing, not as an industry but as an artisan craft, defying the rest of the world’s attempts to imitate it.

The first written document testifying glass production in Venice goes back to 982, when the glass furnaces where still in downtown Venice itself.

However, archaeological research has given the evidence of glassmaking activities in Torcello back in the 7th/8th centuries, as to say at the very beginning of Venetian civilization.


Continue reading
What gave a strong new input to this ancient craft – already known by Ancient Egyptians, while blown glass was probably invented in Syria in the 1st century A.D. – were the exits of the 4th Crusade (1204-1261) when the Venetians ‘inherited’ (or stole…) an enormous amount of precious items of any kind from Constantinople, the declining megalopolis  at the head of the Byzantine Empire.

Together with the marbles, the cloisonne’ enamels, the bronzes, books, jewels, textiles, the new rising star of the Mediterranean certainly imported highly skilled craftsmen and technologies of any kind.

Early artistic Venetian blown glass resembles Byzantine glass, of course, with its polychrome enamels and gold. Due to the huge wealth and commercial expansion triggered by the events of the 4th Crusade, Venice   experienced a demographic boom.

By the end of the 13th century there was no more room in Venice for the glass furnaces, dangerous as they were for the constant danger of setting on fire.

As it happened for other industries, the glass making was moved to a smaller, less crowded island, Murano, just a mile off the Northern side of Venice.  So far Murano had been famous for its monasteries, rich merchants’ resorts, fertile orchards. and luxuriant gardens.

The official decree came in 1291, and in few years all the glass making activities, excluding beads and rosaries that continued to be allowed to remain in central Venice, settled in the new location.

The island of Murano was doomed: since that moment its name will be forever world famous for its high quality, wonderfully shaped and colored glass items, exported all over Europe (and even further) to ornate the houses and the tables of the nobility and royalty over the centuries. Goblets, beakers, jars, bottles, vases, dishes, and. later, mirrors, sculptures and chandeliers will continue to be a status symbol up to our days.

As for other crafts, even for the art of glass making, Venice had to import almost all the raw materials from far away. Silica was originally extracted from sand, but the transparency and pureness of the glass improved enormously when the sand was substituted by river pebbles (from the Ticino and the Adige rivers).

The pebbles had to be heated and ground. The silica sand used today is imported from Fontainebleau (France).

The inventor of vetro cristallo, a glass as clear and transparent as rock crystal (=quartz) was Angelo Barovier – we are now in the mid-15th century. The fluxing element to lower the silica’s melting temperature and to stabilize it was alume catino, derived from the ashes of the salsola soda ana salsola kali bushes growing in Syria and Egypt coastal regions. Venetians kept the monopoly on the import of this product.

Manganese oxides, used to neutralize the natural color of glass, was imported from Catalonia, Piemonte, Germany and France.

The pigments came from all over, thanks to the wide and well-organized net of commercial relationships that was the pride and strength of this maritime Republic. The wood used in the furnaces came from Croatia or from the Dolomites.

The efforts to obtain these results must have been enormous, but the results were exceptional. By the second half of the 15th century, as Constantinople was conquered by the Ottomans and due to artisans’ migrations and new commercial assets in the Mediterranean, Murano glass received a further impulse, and the export of Murano glass artifacts became an important source of income for the Serenissima.

‘Lattimo’ or ‘milky’ glass, used as an imitation of porcelain (never produced in Europe until the beginning of the 18th century), while many colored glasses were made as imitation of gems or precious marbles.

Wonderful objects were made with the reticello and retortoli techniques, typical of the late Renaissance and Baroque period. These techniques are based on the use of rods of cristallo with a core of lattimo, creating a delicate filigree.

Another celebrated contribution to Renaissance art was the creation of excellent quality mirrors, made with cylinders of blown glass, and richly ornate with flower glasses.

Notwithstanding the restrictions that obliged all glass masters to live on the Island and the prohibitions about selling their skills to foreigners, a quite large number of Murano artists left the Serenissima through the years with the hope of making more money away from home and began to sell their secrets to other nations!

We know of Muranese glass makers attacked by the Indians in Virginia, but many more did nor reach that far, and would rather move to France, England, Spain, Belgium, Austria and even Sweden.

Imitation of Murano glass began to invade the market. In Florence, by 1612, under the auspice of the Medici, the first manual of Murano Glass recipes was published, with the help of Antonio Neri, a clandestine Murano expatriate. The book was translated into different languages and started to circulate.

In the end, the result was that other nations developed their own independent glass making activities, and Venice had to compete with France, England, Bohemia…

The 18th century was therefore for Murano masters an age of crisis, as the taste changed, and even Venetians started to appreciate thicker and shinier Bohemian and English glass.

But thanks to the genius of Giuseppe Briati, who by the 1740es created a new kind of chandelier called ciocca, made of a potash crystal of great brilliancy, and that helped Venice to remain on the market.

These chandeliers, very elaborate and decorated with multicolored flowers, are still successfully produced today, in an infinite series of versions, ranging from the very classic Rezzonico style to much more contemporary lines.

With the fall of the almost millenary Venetian Republic all traditional arts and crafts suffered. Under the Austro-Hungarian Empire Murano was neglected to favor Bohemian artifacts instead.

Most glass factories in Murano had to close, and basically only the traditional beads continued to be produced without interruptions.

However, by the 4th decade of the 19th century we assist to a revival in Murano art, with rediscovery of lost techniques, such as reticello and chalcedony glass, and this renaissance will reach its pinnacle after the unification of Italy in the 1860es.

A Milanese lawyer, Antonio Salviati, opened a mosaic factory along the Grand Canal that was to become almost legendary, and launched Murano glass on the British market.

Salviati started a new glass workshop in Murano itself. In the same years. the Museum of Glass was created by Abbott Vincenzo Zanetti, that also instituted a School of Design for Glass Makers.

The ‘’Salviati and Co.’’ factory spurred the masters of the Seguso and Barovier families to reproduce perfect copie of the historical pieces, while Vincenzo Moretti resurrected the ancient Roman Murrino Glass, a technique still very successful produced today.

After the war there was a general claim for functionality and simplicity. The “Cappellin, Venini and Co.” opened in 1921, and art director, the famous painter Vittorio Zecchin, produced pure, elegant vases, much appreciated by critics and buyers, inaugurating a new stylistic trend in Murano glass, still extremely praised in our times.

The Italian “Novecento” style, based on plastic realism close to 15th century art, inspired such great maestri as Ercole Barovier, Napoleone Martinuzzi, Carlo Scarpa, Archimede Seguso and was one of the happiest seasons in Murano glass recent history.

After World War II the professional figure of the designer, frequently coming from abroad, has become a solid tradition in Murano, even though in many glass factories the central figure remains the traditional local maestro.

The interaction with artists coming from other domains seeking the collaboration and the technical expertise of the Murano masters is now a well rooted reality on the Island. At the same time many of the best Murano glassmakers are often invited abroad as visiting teachers and lecturers.

Our impression, as insiders, is that, notwithstanding all the innovations in technology and all the openings to the world, the core of the tradition, the tools, the gestures, the atmosphere of the furnace has not changed that much since the old days.

Every piece is unique, and every creation is a different emotion…the experience of watching high level glass making is somewhat hypnotic and timeless…