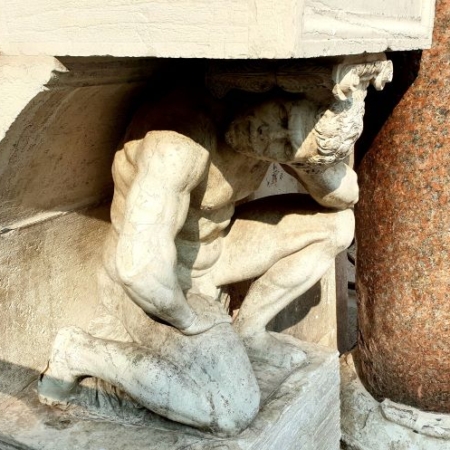 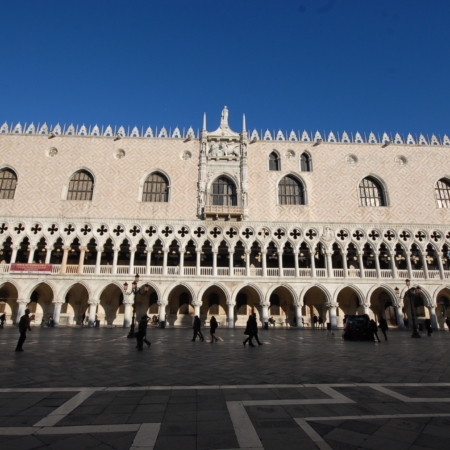 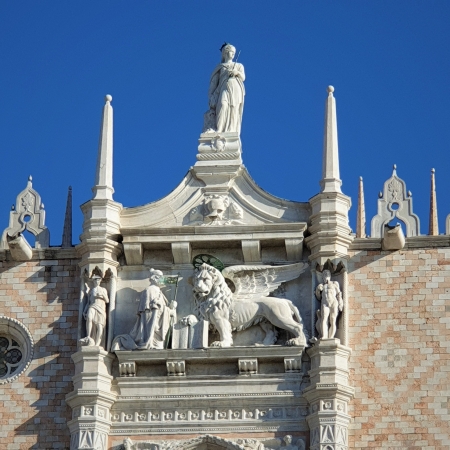 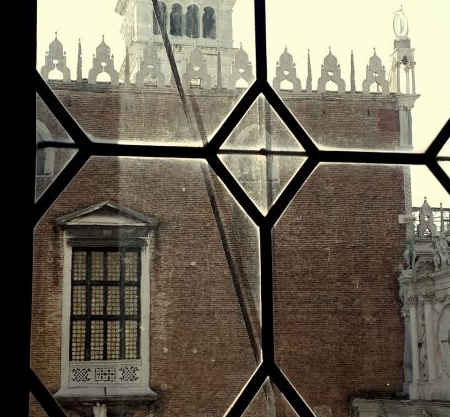 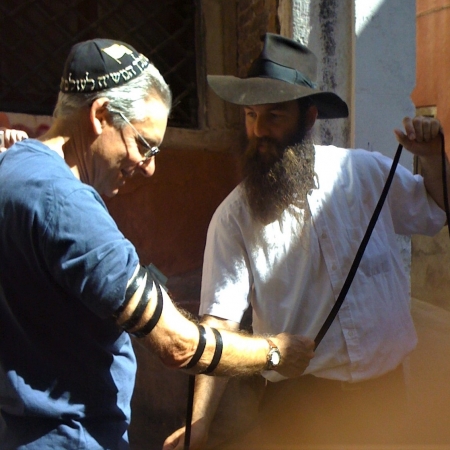 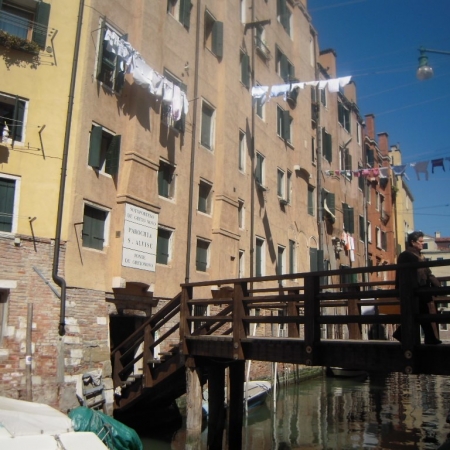 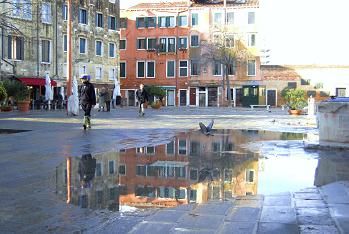 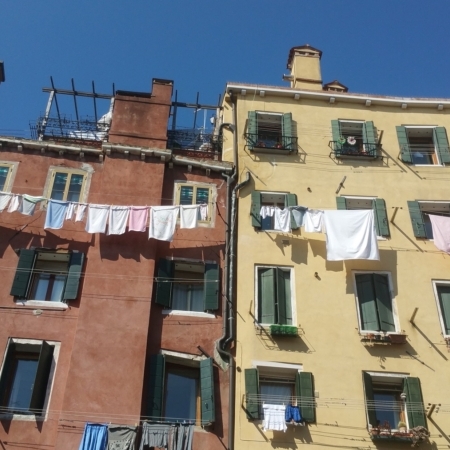 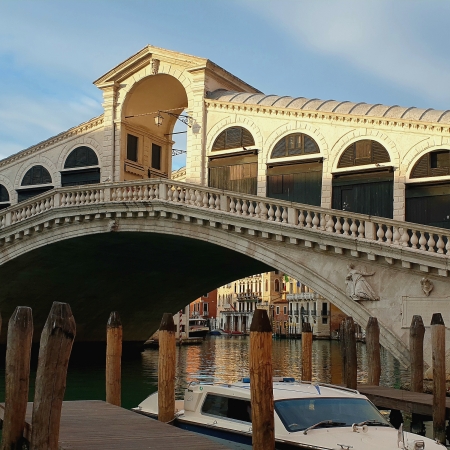 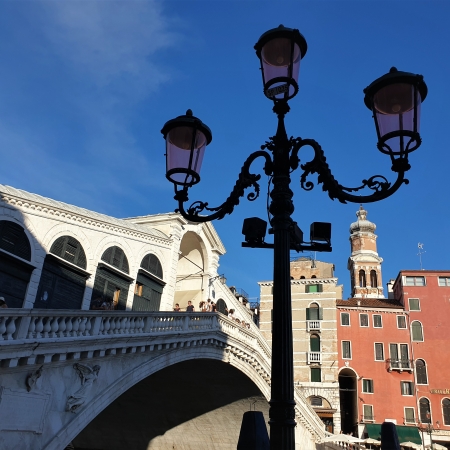 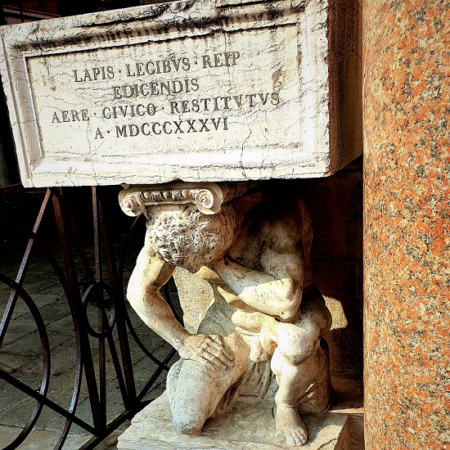 Our Shakespearian literary walk begins in St Mark’s Square, in front of the Doge’s Palace, where Brabantio, Desdemona’s father, accuses Othello of having raped his daughter, where Othello defends himself, and Desdemona declares her love for the charming Moorish general. We will recall the unforgettable scenes and production vicissitudes of Orson Welles’ black and white movie “Othello “(1951).

Passing by the monumental Mint, designed by Jacopo Sansovino in the mid-16th century where Venice cast its golden ducats and other coins, we evoke Shylock’s anguished cries: ‘My daughter! O my ducats!’ as Solanio refers by mimicking the old man’s despair at his daughter flight in the second act of The Merchant of Venice.

We continue then in the Frezzeria, that means ‘the arrow-makers’ street’, whose name probably is the origin of the name Sagittary that the Bard attributes to the place (an inn?) where Othello and Desdemona spent their wedding night in Venice.

We reach the Rialto Bridge, that during Shakespeare’s times was reconstructed in brick and stone, Rialto is the only site in Venice mentioned by the great playwright in the Merchant of Venice. The small ‘campo’ of San Giacometo, defined by historians ‘the Wall Street of Europe in the Middle Ages, meeting point of merchants, sailors, bankers, moneylenders, naval insurers…

‘What news on the Rialto?’, are the famous words that resound more than once through the play, conjuring up the atmosphere of bustling, exotic, business center that most of Shakespeare’s audience had never visited. A particularly iconic spot is the famous Gobbo di Rialto, the statue of a man carrying on his back the Pietra del Bando, a stone platform where public officers would read the news concerning ships, stocking exchange prices, economical news coming from all over.

And Gobbo is also the name of one of the Merchant’s minor characters. Although it is highly improbable that Shakespeare ever put a foot in Venice, it seems he had some insights from people that had traveled to the Lagoon. According to Professor Brian Pullan the episode of Jessica, Shylock’s daughter, running away with a young Venetian (and Christian) man was also inspired by facts that really occurred in Venice in those days.

Not far from the Rialto market is the secluded area called Le Carampane, once the red lights district of Venice, where the first two public theaters opened by the 1580s. A contemporary Englishman, Sir Thomas Coryat, in his Crudities (1611) gives us a brilliant description of one of these theaters, comparing it with the theaters in London, and gives his own opinion about the actors, actresses, and audience. If Shakespeare had had the chance of traveling with him, we would have his own, perhaps more ‘professional’, point of view!

WANDERING IN SHAKESPEARE’S VENICE  continues across the Grand Canal with the gondola ferry and reaches the Ghetto, established in 1516 by the Venetian government. Although William Shakespeare never mentions it, it is inevitable for us to envision Shylock walking among the tall buildings of this tiny Jewish quarter, wearing his black gabardine, reasoning with his friend Tubal or imparting orders to his daughter Jessica. We’ll talk about the different interpretations given to his character through the centuries.

HIGHLIGHTS OF THIS TOUR

on the steps of Shylock and Othello

WANDERING IN SHAKESPEARE’S VENICE – Shakespeare sets 13 of his 37 plays in Italy, an exotic land of passion, violence, and intrigue, and two of them, The Merchant of Venice and Othello, a comedy, and a tragedy, are partly taking place in Venice. Shylock and Othello, the Jew of Venice, and the Moor of Venice, are both outsiders in a cosmopolitan metropolis, a bustling commercial haven, that the British respected for its wealth and solid government and despised for its moral looseness, a city which was already not just a real place, but a city of the imagination (as it continues to be to our days). There are infinite discussions about whether Shakespeare ever came to Venice or not, but most likely he never traveled to Italy at all. In London he could find quite a lot of information and inspiration, both from literary texts and from people that had been there.

WANDERING IN SHAKESPEARE’S VENICE tour informs you that in The Merchant of Venice there’s no mention of the Ghetto, or any hint to the existence of a Jewish quarter. Also, Shylock, talking to Tubal, refers to the synagogue, without any further specification, giving the impression that Shakespeare ignored the presence of multiple synagogues in Venice. Professor Brian Pullan, one of the major experts  in Venetian Jewish history,

found out that  in 1589 (as to say 7 years before S. wrote The Merchant of Venice,  Christian gate keepers of the Ghetto were named Gobbo, that is the name of Shylock’s servant . However, Gobbo (as to say, ‘hunchback’) is also the traditional name of one of the most popular statues in Venice, still today located in Campo San Giacometo, around which the merchants gathered to hear State decrees and regulations. And we must not forget the fact that Rialto is the only site in Venice that the author mentions, insistently, as the place where everything important for businessmen happens.

Also, Professor Pullan also asserts that the love story of Shylock’s daughter, Jessica, who runs away with a Christian, Lorenzo, and her father’s ducats, could be inspired by the true vicissitudes of a young sailor, Giorgio Moretto, that in 1589 was sentenced at three years rowing on a galley for his romantic affair with Rachel, daughter of Isaac, and his habit of joining Jewish festivities  at the Ghetto.

One more curiosity about WANDERING IN SHAKESPEARE’S VENICE: in Othello there’ s reference to a place called ‘Sagittary’, where Desdemona and Othello have spent their wedding night, and some scholars have guessed it could be the invented name of an inn.  But ‘Vicus Sagittarius’ was the old name of a Venetian calle, the ‘Frezzeria ‘ (sagitta= arrow=frezza’ in Venetian), today an elegant shopping street right behind St Mark’s Square, once the street of the ‘arrow makers’. This would prove Shakespeare had a surprising familiarity with Venetian topography! Then, on the other hand, the only other reference to a Venetian site in Othello is to the Doge’s Palace, where Othello defends himself in front of Brabantio, the Doge, and some senators, and where he’s ordered by the Doge to leave for Cyprus at the command of the Venetian navy against the Ottomans. A good help to envision what Venice was in the eyes of a British ’tourist’ in William Shakespeare’s and Ben Johnson’s times Is Thomas Coryat’ s Coryat’ Crudities’, a travelogue published in 1611, relating of a trip to France, Italy and Germany, a sort of ancestor of the ‘Grand Tour’. His vivid and detailed description of the Rialto Square, where merchants met twice a day,  and his experience with the Jews at the Ghetto and inside the synagogues can  be a great source of inspiration for anyone willing to reenact  Shakespeare’s plays, or simply to any modern visitor arriving to Venice on the tracks of the Bard… Last:  a word about Shakespeare’s Venice in movies. Orson Welles’ black and white Othello (1951) recently restored, expressionistic, visionary, dark, intense, leave long lasting emotions, especially in the depiction of the Doge’s Palace interiors. Al Pacino’s unforgettable Merchant of Venice (2004), director Michael Radford, shot in a foggy winter, transports you into a painterly Venice, visually playing on rich reds and bright lights set against dark backgrounds, reminiscent of Rembrandt illumination.

No dress code for this tour!

This tour lasts three hours and costs 295 euros up to six people (not per person), only private parties. For larger parties send us an email!