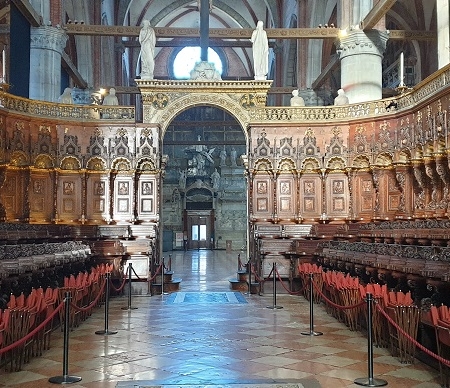 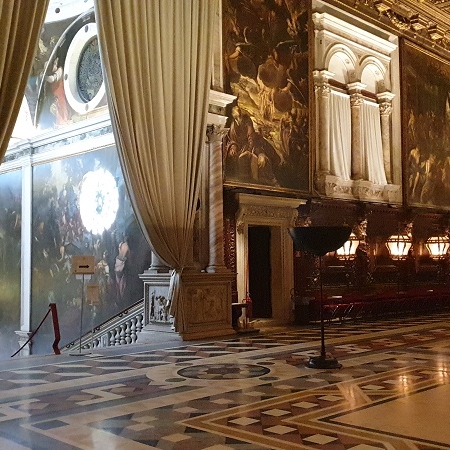 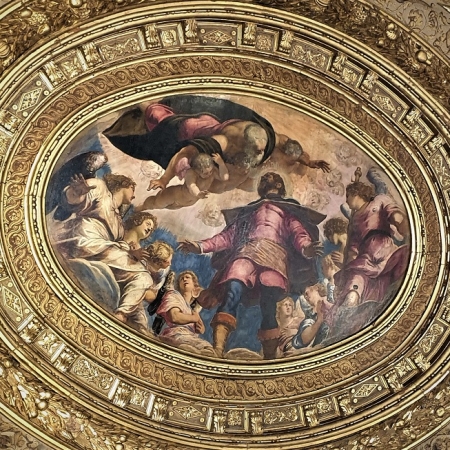 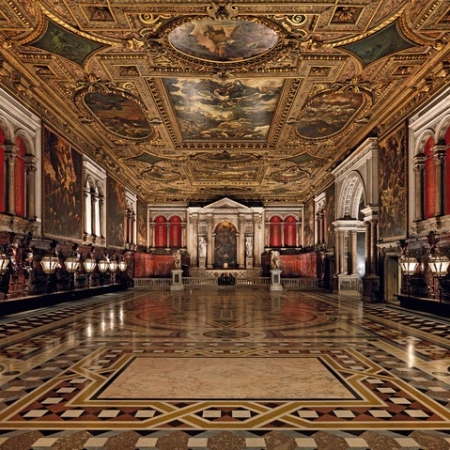 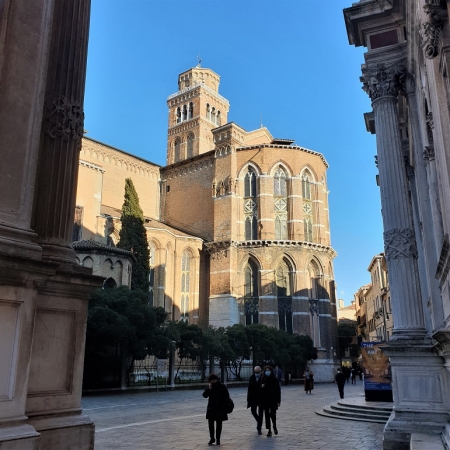 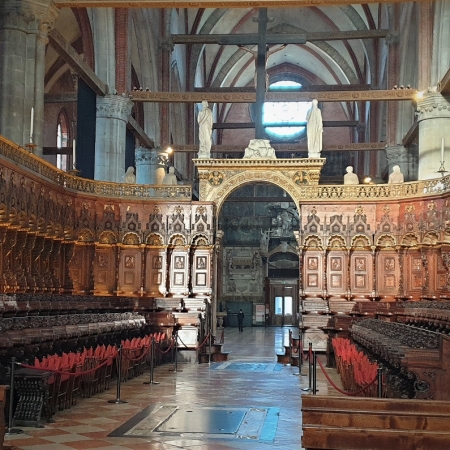 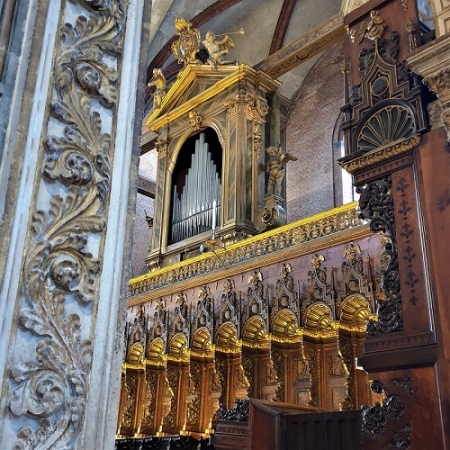 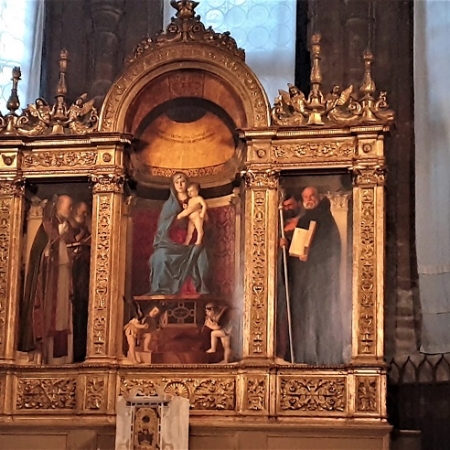 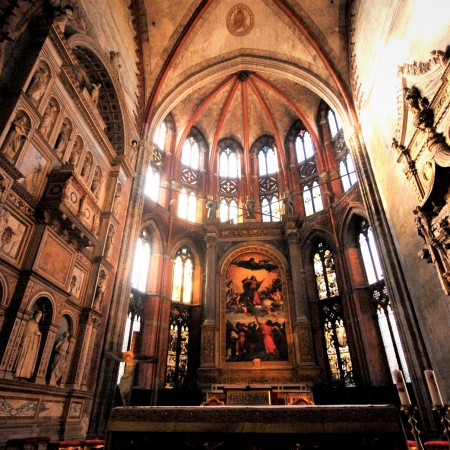 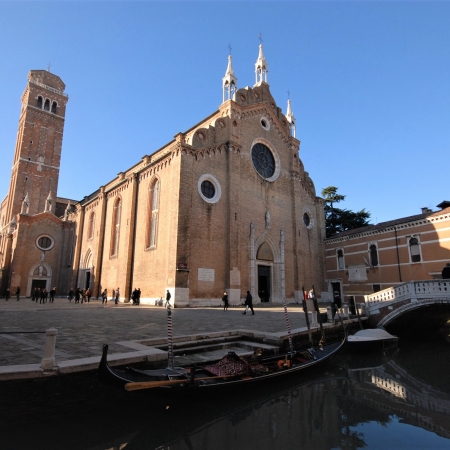 This tour is dedicated to all art and history lovers, with special attention to Renaissance painting.

While a great deal of the milestones of Venetian painting are to be seen in the Accademia Galleries (that we also recommend) some of the absolute masterpieces by Giovanni Bellini, Titian, and Tintoretto, can still be appreciated in their original sites. Of course, this helps understanding the paintings themselves, and the reasons why there conceived in a certain way. History, somehow, unfolds clearly in front of your eyes.

A short boat ride along the Grand Canal and some of the minor waterways will bring us to San Polo area, not far from the Rialto Bridge, for a visit to the Frari Church first and then to the Scuola Grande San Rocco.

The impact with the enormous space inside the Frari can be overwhelming: slowly, with the help your guide-lecturer you will start appreciating the most important works and like in puzzle, you will soon be able to assemble the components that formed the Venetian society in the 15th and 16th centuries: the big noble families, the State, the foreign communities, the citizens, the monastic orders, the benevolent institutions.

The main artistic figures we shall take into consideration here are of course Titian, who is present here with the Assumption of the Virgin and the Family Pesaro altarpiece. Both paintings were recently restored. These fundamental works in the artistic life of Titian were examined by enlightened art historians who revealed their ‘secrets’. The third ‘big’ is the Holy Conversation by Giovanni Bellini, fascinating and almost hypnotic.

Your guide will sketch the important relationship between Giovanni Bellini and Titian, master and pupil, and their importance in the development of Venetian painting, celebrated during the Renaissance for its supremacy in coloring, while, on the other hand, Florentine painting predominated in the art of drawing.

We leave the Frari retaining strong emotions conveyed by the flow of images you saw and by the things you learned. A few minutes coffee break will let your mind repose and absorb all the beauty you were exposed to. Ready for another immersion? Just behind the apses of the Frari stands Scuola Grande San Rocco…

A ‘scuola’ was in Venice the seat of a benevolent organization. San Rocco was a large fraternity of citizens and noblemen – women were excluded – whose main task was

supporting its members during the recurrent epidemics of plague or cholera. It also provided a dowry to 12 poor young women every year.

It is the only ‘great’ fraternity of Venice to be spared by Napoleonic spoiling, it still maintains its original paintings and statues, plus a superlative collection of ceramics and music instruments. Stepping inside means plunging into the history of the city, seen through one of the most powerful if its civic institutions.

The ‘genius’ who bound for eternity his name to Scuola Grande San Rocco is that of Jacopo Tintoretto, who struggled with all his strength to get the job and then worked here intermittently for a period of 24 years.

We are in the third quarter of the 16th century, Venice was ravaged by a tremendous plague in 1575/76: by this time Tintoretto, who had already magnificently decorated the hall of the Hostel, obtained the commission of the entire Upper Hall: here he displayed all his visionary power in a series of huge canvases that narrate fundamental episodes of the Old and of the new Testament. His passion is overwhelming.

The Old Testament is on the ceiling and the New around the walls. This cycle is often compared to Michelangelo’s Sistine Chapel. No doubt the influence of the great Florentine marked the artistic life of Tintoretto who never visited Rome but was well updated about the novelties coming from the rest of Italy.

The other outstanding artist who left his masterpiece here at San Rocco was Francesco Pianta, the witty and eccentric author of the curiois, almost exoteric wooden statues around the walls.

We re-descend to the ground floor to admire some of Tintoretto’s final works for the brethren of St Roch: an inventive and unforgettable Annunciation and an almost Flemish Flight into Egypt will crown our visit.

A few words about St Roch, whose body is supposed to rest in the nearby church, will complete our intense  VENETIAN PAINTING IMMERSIVE TOUR. Our water-taxi will be ready to take us back.