VENICE: THE POWER OF THE PAST, THE EVERLASTING MYTH 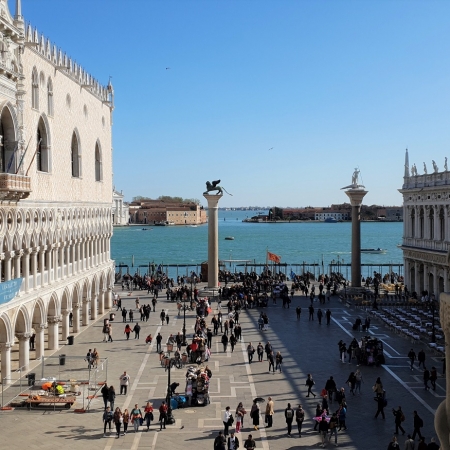 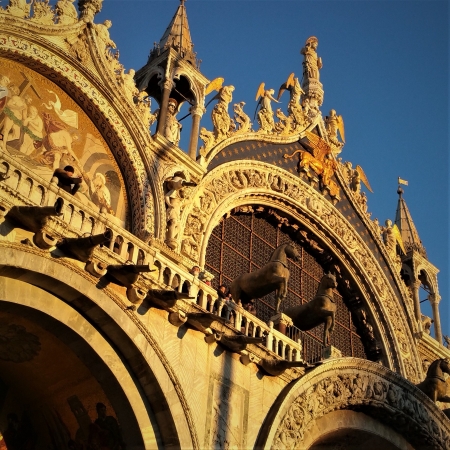 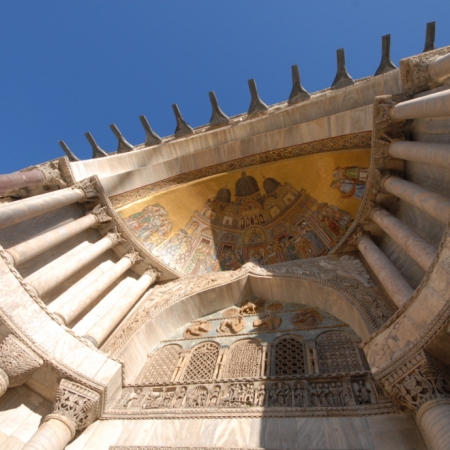 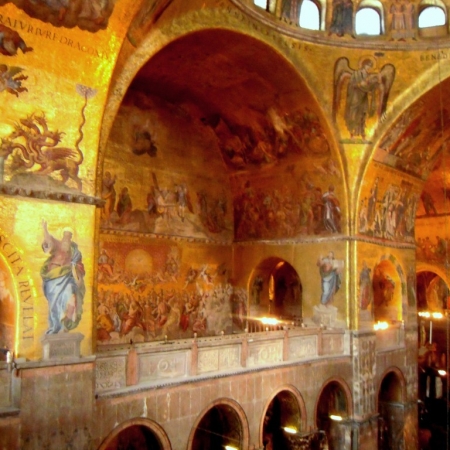 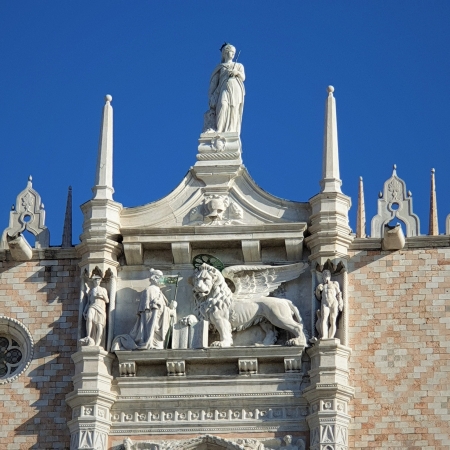 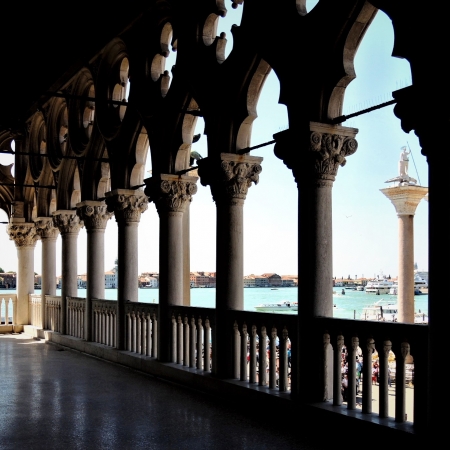 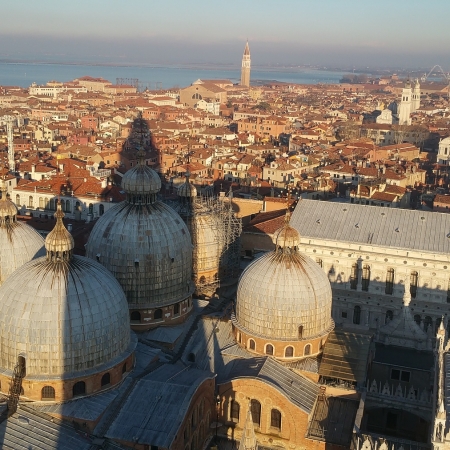 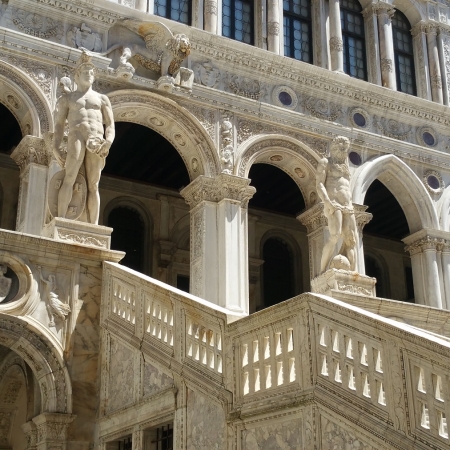 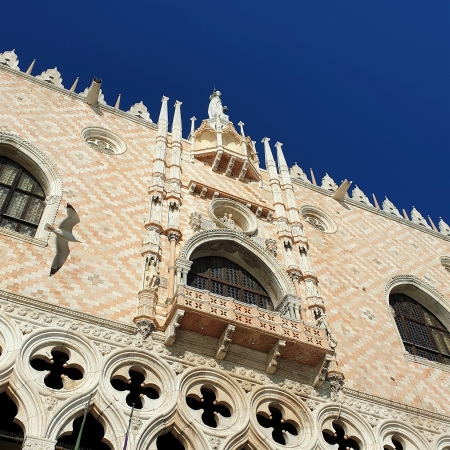 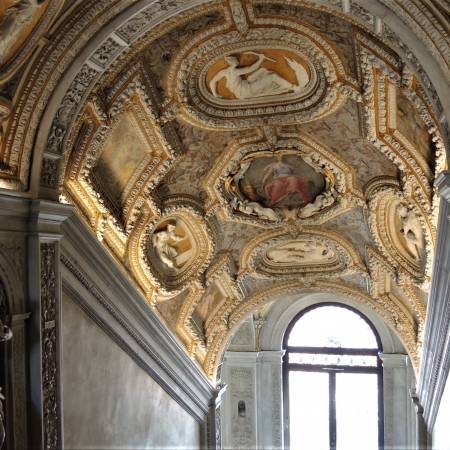 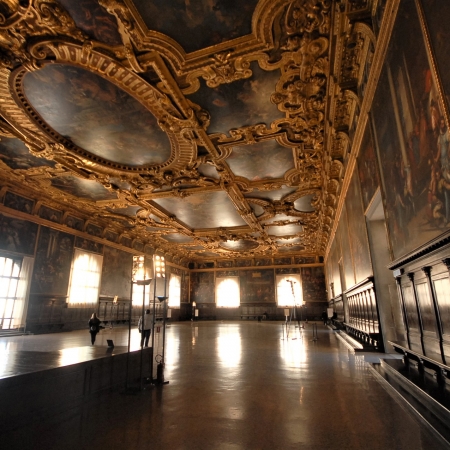 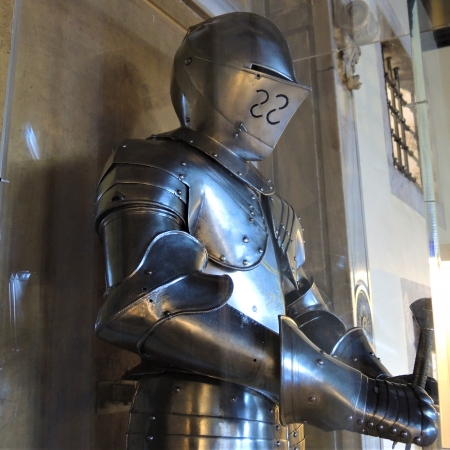 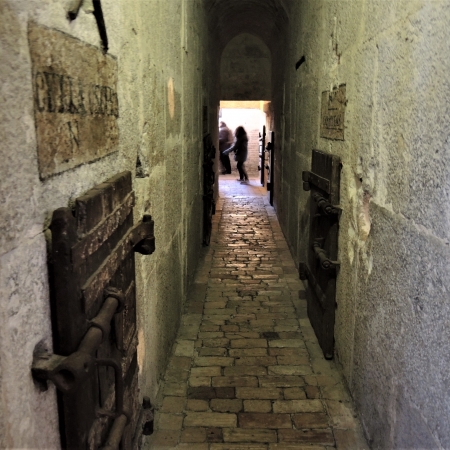 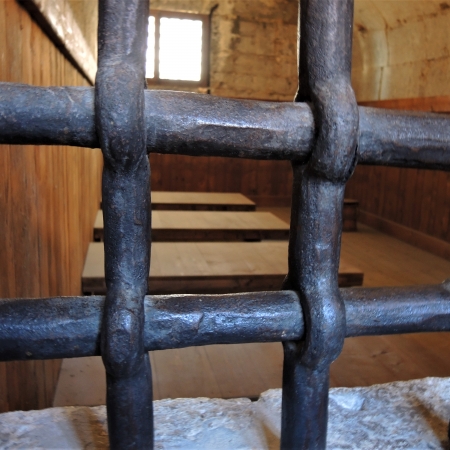 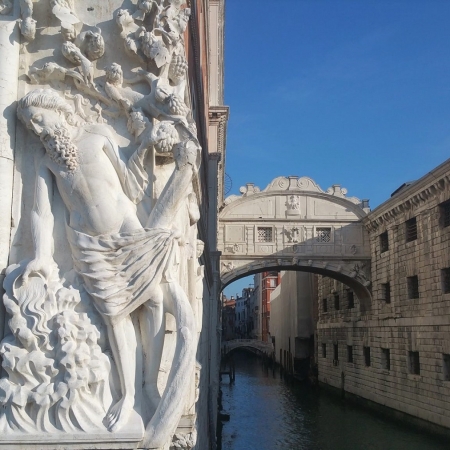 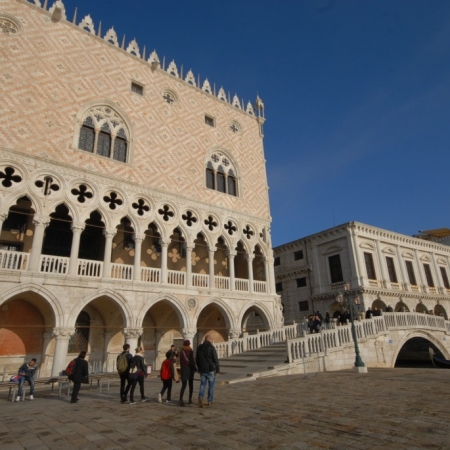 VENICE: THE POWER OF THE PAST

St Mark’s Basilica, dedicated in 1094, was the private chapel of the Doges’ Palace until 1806.

With its fantastically ornate multi columned façade, the spiritual intensity of its golden mosaics and sumptuously colored marble floor, St Mark’s Basilica introduces the theme of Venice’s intense and enduring relationships with Constantinople and the Middle Eastern world.

We will access the Basilica via our priority entrance, available April through October. Upon request, we can include a visit the so called Pala d’ Oro, as to say the Golden altar screen.

The Pala is a quintessential example of the Venetian admiration of gold, precious stones, and bright colors like lapis lazuli blue, red, and turquoise.

Continuing, we may climb the old staircase to the upper floor Loggia. The Loggia is renowned for both its four gilt bronze Horses, acclaimed symbols of Venice and the exceptional view of the Piazza below.

We will dedicate the rest of our tour to the Doge’s Palace, seat of Venetian power for over nine centuries.
Here you will learn about the rise and fall, and everything in between, of “La Serenissima,” the Most Serene Venetian Republic.

During VENICE: THE POWER OF THE PAST tour our guide will also explain the political, legislative, and juridical institutions that were at the base of this long-lived and highly organized State.

If you are partial to painting and sculpture, you will be impressed by the powerful works by Jacopo Tintoretto, Paolo Veronese, Jacopo Sansovino, and others.

These works are displayed on the ceiling of the Golden Staircase, the Doge’s Apartment walls and the governmental rooms.

These are perfect examples of how efficiently art can help political propaganda in any era.

Once across the Bridge of Sighs, we shall visit the “New” Prisons, a separate building designed at the end of the 16th century to be a more humane and functional jail. The building was in use until 1922.

If you want to see more of the Doge’s Palace you might like our Venice History for Families tour.

VENICE, THE POWER OF THE PAST

The first Doges’ Palace was built on the same location of the present one around 810, mostly for strategic purposes, and must have looked like a simple if bulky fortress.

The location, with St Giorgio Maggiore Island right on the opposite shore of the deep watercourse, permitted the military control on any ship arriving from the Adriatic Sea into the heart of Venice.

Nowadays from here you can see the hundreds of cruise ships coming in or leaving, but Venetians hope that sooner or later these enormous ‘monsters’ will be diverted to a less fragile and artistically relevant area of the Lagoon.

There was a first reconstruction of the Ducal Palace by 1177, due to the generosity of Doge Sebastiano Ziani, with the occasion of the historical meeting in Venice of the Pope Alexander III and Friedrich Barbarossa,

Emperor of the Holy Roman Empire. Doge Ziani also financed the enlargement of the Square, that used to be much smaller than today.

Venice was growing an important international power, and in the first half of the 13th century, after the conquest of Constantinople during the 4th Crusade, reached its first economical apogee and greatly enlarged its Sea Empire.

Very little is left from this second construction, as by 1340 it was decided to build a new building along the waterfront. This is the one we can still admire today, a magnificent Gothic Moorish architecture, where white and pink stones prevail, light and elegant with its enormous arches and windows.

The facade overlooking the Piazzetta was completed only in the 1430es, due to long years of delay caused by the effects of the Black Plague in 1348 and by the economic crisis triggered by a long war with Genoa.

By the early 15th century, Venice had begun a policy of expansion on the near Italian mainland. Treviso, Padua, Vicenza, Verona, Brescia, Bergamo were all annexed. New architectural ideas began to influence the city on the Lagoon, and slowly the pointed arches and the Moorish traceries began to be substituted by the forms of the Renaissance.

Entering the imposing courtyard, you will notice the different style of the eastern wall, that was rebuilt after a fire in 1484. The Early Venetian Renaissance style of this wing of the palace is well harmonized with the other three. The Giants’ Staircase with its decorated steps and with the Giants’ (Neptune and Mars) statues by Jacopo Sansovino at its top is the most attractive feature of this area of the Palace.

The Venetian expansion was halted by Pope Julius II with the League of Cambrai on the western side, and by the Ottoman navy on the Mediterranean front.

By the mid-16th century, the Serenissima Republic had definitively entered a long period of slow economic decline, which was conversely accompanied by splendid artistic production.

The terrible Sack of Rome in 1527 had brought to Venice many artists, that sought for refuge and new patrons. The Republic renovated its style thanks to artists such as Sansovino and his team of artists, that settled in the city and never left.

The greatest example of this moment here is the Golden Staircase, with its magnificent white and gold stuccoes, reminiscent of Ancient Rome, but with an exquisitely ‘Venetian’ taste for gold and lavish ornamentation.

In 1574 and in 1577 the Doges’ Palace was hit by two big fires, and a good part of the rooms had to be completely redecorated. The most famous painters in charge were Paolo Veronese, and Jacopo Tintoretto, whose very different styles and colors create an interesting contrast in the exuberantly decorated halls of the Palace.

The number of different waiting and meeting rooms witness the complicated Venetian state organization, about which we know almost everything, due to the enormous bulk of documents still available in the archives.
Hundreds of essays were written on this fascinating theme and help to figure how a small town built in the middle of a salt-water marsh became one of the leading powers of the world and was able to maintain its independence and republican institutions for 900 years.

In the 1700s the lagoon city had already reached mythical status: its fantastic beauty, palaces, painters, music, theatres, and most importantly, the unexpected government tolerance towards human vices transformed it into a not-to-be-missed stop for all travelers on the European Grand Tour.

At the end of the century Venice’s rulers finally gave up: on May 12th, 1797, after centuries of glorious, wise, business minded, tolerant governance, the political class voted itself out and peacefully surrendered in front of Napoleon.

The Ducal Palace was also the Palace of Justice and at its bottom and top floors there were two small (but famous) prisons, called respectively ‘Piombi’ (most famous guest: Giacomo Casanova!) and ‘Pozzi’.

By the end of th 16th century a completely new building, designed to be a secure but humane and much larger jail was raised next to the main building and soon was connected to it by a small covered double passage over the canal known as ‘Rio di Palazzo’, a functional passage for prisoners and their jailors. This small, elegant white stone bridge was to become universally known as ‘the Bridge of Sighs’, and is today the kind of romantic, must-see spot for any first-time visitor.

Located by the North side of the Ducal Palace is St Mark’s Basilica, until the fall of Venice Republic the private chapel of the Doge’s Palace, since 1806 Patriarchal See of Venice and still today regularly as a Roman Catholic Church. It also has the title of minor Basilica.

The present building was consecrated in 1094, inspired in its forms and decorations to the Apostoleion, on the of the great old churches of Constantinople, the huge international hub of the day where the Venetians of those days were active as merchants.

About a century later, things went wrong for the Venetian businessmen in Constantinople, who were expelled from the city. As a reaction to this event Venice organized and diverted the Fourth Crusade, leading it against Christian Constantinople, that was sieged in 1204, conquered and sacked systematically during the following decades.

Hundreds of magnificent marble columns and many other precious ‘souvenirs’ were shipped to Venice during those years. St Mark’s Basilica was enriched by an astonishing number of marbles, bronzes, and other precious items, most of which we can still admire today.

While over 80 kinds of marble cover the fantastic floor and the lower part of the walls in and out the Basilica, all the upper part of the building, with its major five domes and many other smaller cupulas and arches, are encrusted with brightly colored glass mosaics, from different hands and periods. What gives harmony and unity to all these holy representations is the golden mosaic background.

This tour lasts three hours and costs 280 euros up to six people (not per person), only private parties. For larger parties send us an email!