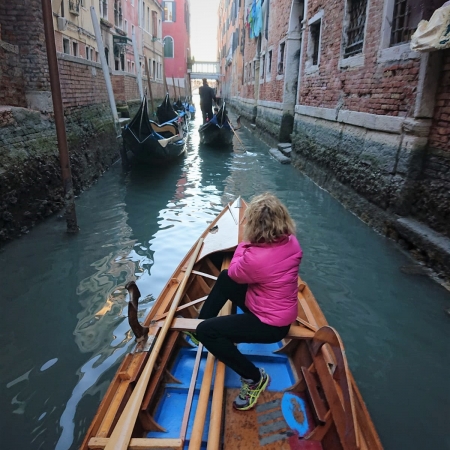 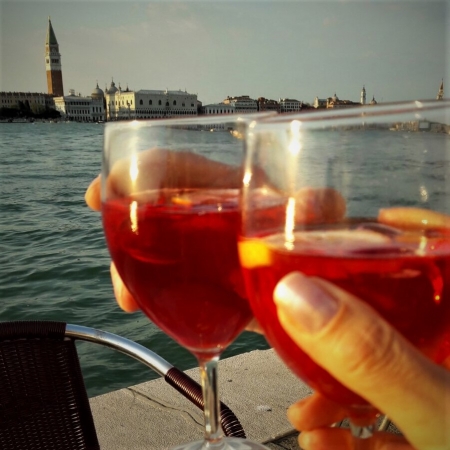 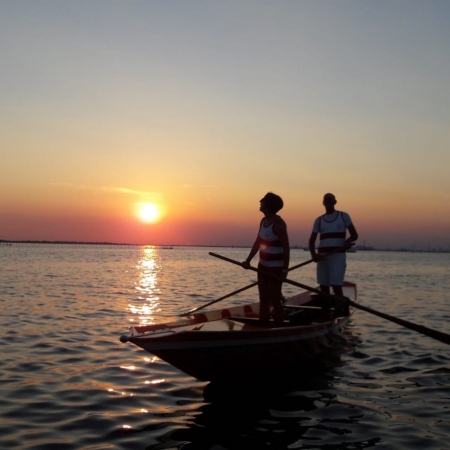 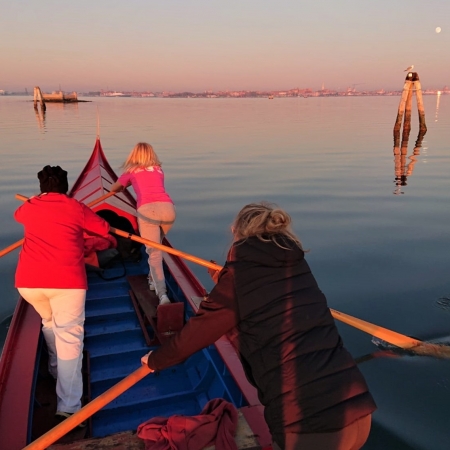 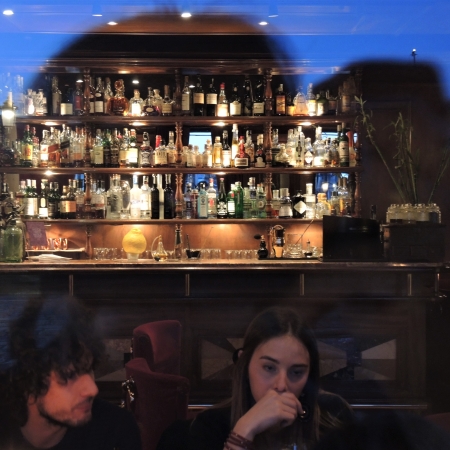 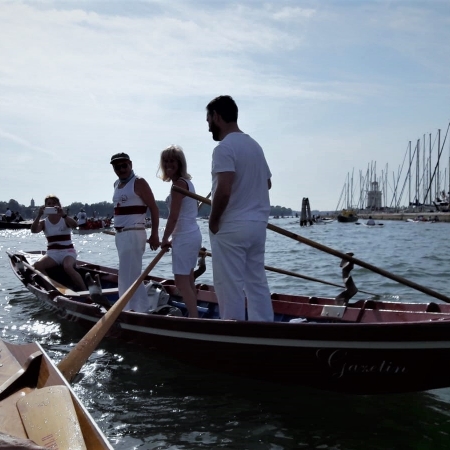 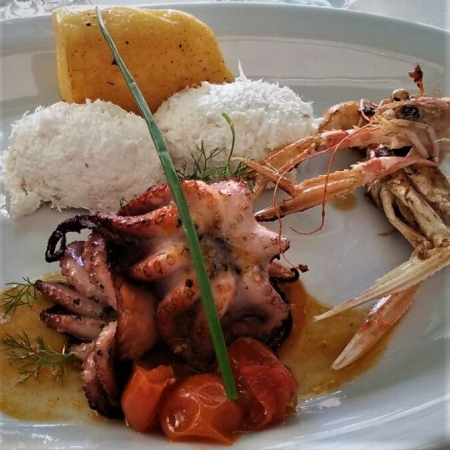 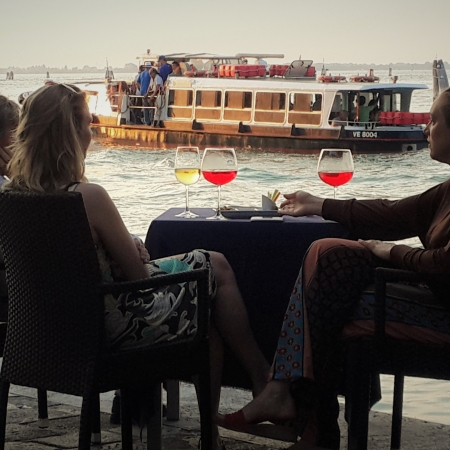 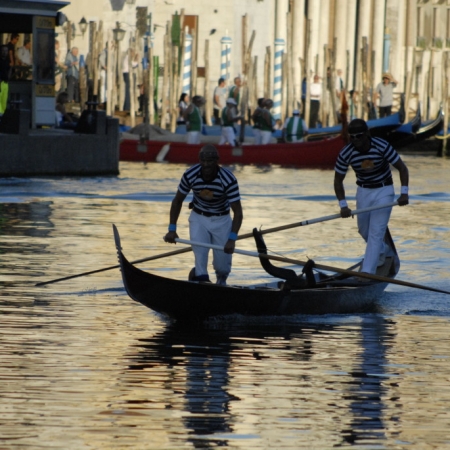 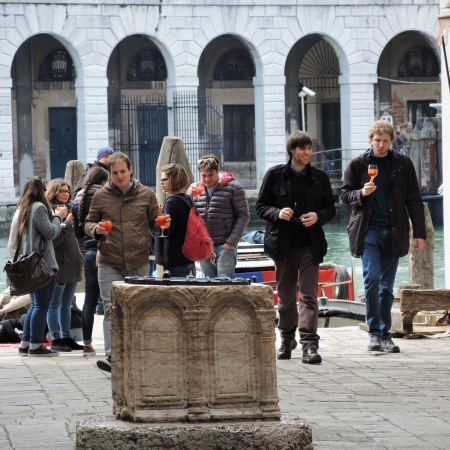 There is nothing more quintessentially Venetian than rowing down the city’s silent canals on one of its slender, elegant boats in the traditional style: standing up, facing forward, just like a gondolier.

And when you combine rowing Venetian style with eating and drinking Venetian style, it cannot be beat. We call it the bà-ca-row. In this 2 and a half hour, early evening tour, you will first try your hand at the voga alla veneta in a handcrafted batella or a caorlina, a spacious—and much more stable craft—than the sleek, iconic gondola.

As the sun begins to relax in the west, you will first learn the basic stroke as we navigate the Lagoon and quiet canals. Into the Lagoon (where on a clear day, the proud Dolomite Alps line the horizon), you can try your hand rowing a poppa — steering the boat yourself.

After that, we shall return to row along one of the liveliest canals in the city, full of bàcari (that’s the proper name for the local wine bars, a term originating from the wine god Bacchus–for us to choose from for our eating and drinking pleasure).

This is when the city begins to slow down and

Venetians finally meet up to relax, eat, drink and gossip! We’ll share the same pleasures, by choosing two of these bàcari where we’ll sample their regional wines and savor delicious cicheti (finger food).

There is tremendous variety to satisfy even the pickiest of eaters; options include anything from cheeses or salami paired with fried and grilled and marinated vegetables, sweet and sour sardines, baby artichokes, creamy codfish, almost any kind of seafood, and much more!

Choose from regional wines from the Veneto (Soave, Prosecco, Cabernet, Valpolicella) Trentino, Alto Adige, Friuli Venezia-Giulia, and regions across Italy: Tuscany, Piedmont, Puglia and Sicily to name the most important.

Venice was born on mud flats, salt marshes and shallow waters of its expansive lagoon: with 210 square miles and an average depth of just about one meter, it forms the largest wetland in the Mediterranean.

The unique, stand-up voga alla veneta style of rowing was born in this environment, along with a variety of low, flat bottomed, keel less, easy to maneuver boats devised to transport people and goods through a meandering network of channels, canals, and tidal creeks.

A people of boatmen and merchants, the Venetians where masters of lagoon navigation and used it to make their city an invincible bastion.

While over 50 different types of lagoon craft once existed for everything from fishing expeditions to transport of passengers and cargo of all sorts, speedy war galleys and fleets of round cargo ships were constructed in the Arsenale (a Venetian word meaning boatyard—not weapons depot—created at the beginning of the 12th century) were employed to conquer Croatia, Greece, Constantinople, Crete, and Cyprus.

While the fall of the Venetian Republic in 1797 rapidly provoked the decline of ship construction, the making of lagoon boats has continued to the present day.

For most tourists, any rowing boat in the canals of Venice is simply a gondola, but if you stop to observe the rowing traffic in any of Venice’s busy canals, you’ll discover quite of variety of boats that differ in shape, size, colors, and number of rowers skimming across the lagoon surface, just as they have for centuries.

You will also notice that in all the Lagoon row boats (gondola, sandolo, s’ciopon, batella, caorlina…), the rower stands up facing forward so that he can see ahead in the intricate maze of the canals. Wherever you go in Venice, an osteria or bàcaro cannot be far away.

They are easy to spot, just look for a cluster of people, chatting energetically with a goto de vin in hand (goto = glass). Venetians have always been great consumers of wine, and the wine trade has always been very profitable: Rialto area was the ideal market for the “Nectar of the Gods,” from the Medieval age.

As for eating habits, Venice was always noted for its seafood-oriented cuisine and is traditionally influenced by Eastern Mediterranean styles. Conversely, the mainland constantly provided the city with a good deal of much appreciated delis, hard to find in the Lagoon.

Though meat eaters will have no trouble noshing down on savory salami, sopressa, speck and other cured meat cichetti, fish and seafood are still the foundations of Venetian culinary style; possibly seasonal and freshly caught.

The mainland nearby and the island of Sant’ Erasmo in the Northern Lagoon provide excellent artichokes, green peas, asparagus, zucchini, eggplants, arugula, cherry tomatoes, large shallots, and much more…